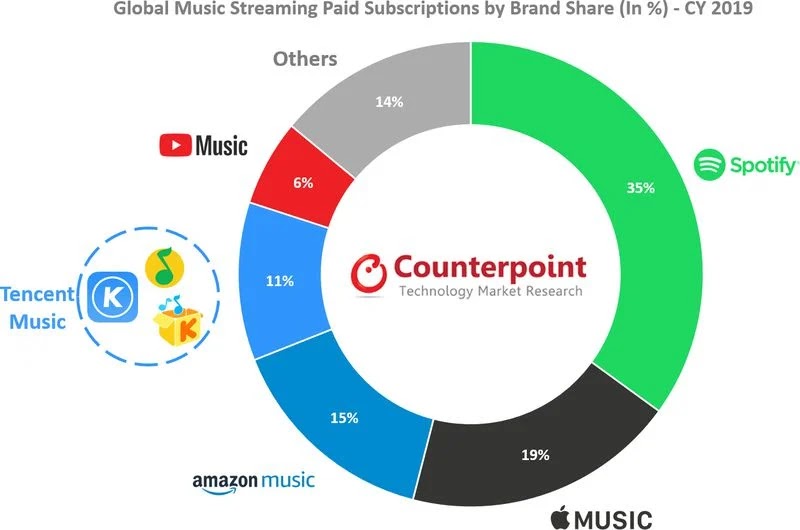 Jing Moreno 4/04/2020
Counterpoint Research released latest data suggests that the global online music streaming subscriptions grew by 32% year-on-year in 2019, and the number of subscriptions reached 358 million. Spotify was the market leader, accounted for 31% of total revenue and 35% of total paid subscriptions.

Apple Music, however, ranks second in the industry, with a 24% share of the market's total revenue and a 19% share of paid subscriptions. At the same time, the number of subscribers of ‌Apple Music‌ is expected to increase by 36% year-on-year.

Amazon Music, YouTube Music and Tencent Music all lags behind Apple Music and Spotify. More than 80% of total streaming music revenue comes from paid subscriptions, while the rest comes from advertising and partnerships with brands and telecommunications companies.

Counterpoint Research predicts that by the end of 2020, online music streaming subscriptions will scale by more than 25% year-on-year, approaching 450 million subscriptions.

The last time Apple shared Apple Music's subscriptions with the public was in June 2019, when it was revealed that the service had reached 60 million paying subscribers. This number could be much higher now, but to date, Apple has not officially published detailed figures in 2020.
Apple Music News Spotify
Author Bio